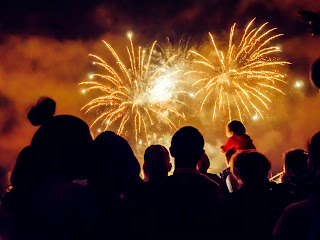 The Elkhorn Campgrounds is at the epicenter of some of Wisconsin’s best sky shows during the summer months. Fireworks are not allowed in the campgrounds, of course. Tents and burning magnesium are a bad mix. However, there are so many early summer displays in neighboring communities, you won’t have to go far for the booms.
June 30 is Elkhorn’s Star Spangled Celebration at Sunset park, with fireworks at dusk, just a few minutes from Elkhorn Campgrounds. But there are a few other notable shows in the area before and after, including …
June 23 – St. Mary’s Fun Festival in Waukesha is a 33 drive.
June 24 – Kettle Moraine Days in historic Eagle is a 24 minute drive.
June 28 – Milwaukee’s Big Bang is the state’s largest display. Gawkers start gathering a day ahead of time on the lakefront. It happens in conjunction with Summerfest, so prepare for traffic. It’s a 45-minute drive.
July 1 brings Independence Day fireworks to Burlington (a 10 minute drive), Twin Lakes (26 minute drive, accompanied by a waterski show and street festival), Whitewater (28 minute drive to the first of two displays, the second on July 4), Tichigan (34 minutes away), and Fort Atkinson (37 minute drive).
July 2 Independence Day fireworks are at the Grand Geneva Resort, a 17 minute drive down US Route 12.
July 3 brings fireworks to Paddock Lake, 33 minutes away, and Lake Como, 11 minutes away. Lake Como’s are visible from any part of the lake, including the Ridge resort and Geneva National golf course, both of which allow viewers.
Fourth of July fireworks shows are slated for Delavan (13 minutes west on Highway 11), Fontana (19 minutes away and the only Independence Day display on Geneva Lake).
August 20 is Lake Geneva’s Venetian Festival Fireworks, capping off a weekend of events just 19 minutes away.

Fireflies dot the area all through Elkhorn Campgrounds from late May through July. Rural Walworth County is home to an abundance of Photinus fireflies, one of more than 2,000 species worldwide. They give Wisconsin woods and fields that unmistakable yellow-green flash.
Fireflies are on the decline today compared to a decade ago, as a result of habitat reduction and light pollution – two things they don’t have to contend with in our area. So come out and enjoy the free, natural light show (0 minute drive). Just remember that if you catch fireflies, you can keep them in a jar (with a lid punched to let in air and a moistened paper towel on the bottom) for only a day or two before you need to set them free.
Photo by Andor Bujdoso , used with permission. 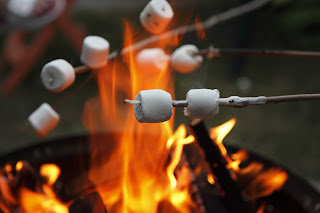 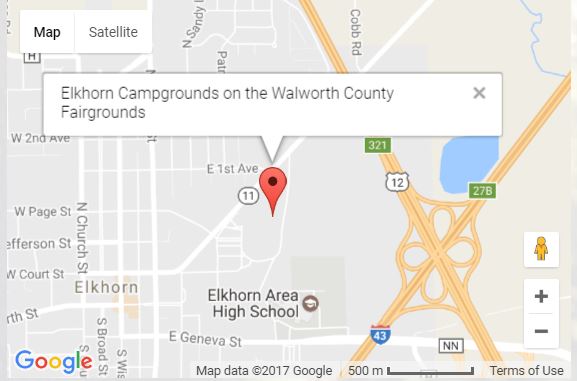 From Milwaukee/Waukesha, Etc., Areas
Hwy. 43 South to Exit #29 (Hwy. 11-Elkhorn Exit.)
Turn right on Hwy. 11 - about 1 mile to Fairgrounds
From Chicago/Kenosha, Etc., Areas
Hwy. 12 North of Lake Geneva to Hwy. NN, Elkhorn Exit. Turn left on NN - about a block down the road is the Elkhorn High School on the right. There is an entrance to the Fairgrounds through the High School driveway. There will be signs.
From Beloit, Rockford, Areas to South & Southeast
Hwy. 43 North to Exit #29 (Hwy. 11-Elkhorn Exit.)
Turn left on Hwy. 11 - about 1 mile to Fairgrounds
From North - Oconomowoc, Etc.
Hwy. 67 South to Hwy. 11 in Elkhorn (Court St.) - turn left on Court St. (Hwy. 11) - 3 blocks to Fair
From Madison Area
I-90 East to Janesville, Hwy. 11 exit. Hwy. 11 East through Delavan to Elkhorn. We're located on Hwy. 11 within the East City limits of Elkhorn.